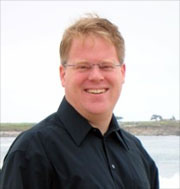 There are bloggers and there is Robert Scoble, the man who I think did a lot more good than all PR experts put together to the image of the Giant of Redmond. He is leaving Microsoft to join Podtech.net. Scoble, interestingly, in his early days was a Mac Evangelist.

Scoble one of 3000 odd bloggers at Microsoft enjoys an unmatched following thanks to his plain-speak and honesty. Though one of his fellow bloggers Niall Kennedy also has a good brand but not to match that of Scoble’s. Niall now is supposed to fill the shoes of Scoble at Microsoft.

Scoble shared this information with the readers.

“This is a rapidly-evolving part of my life. I just made this decision and it got out before I was completely ready to talk about it. – Robert”

He maintained high regard for the company he worked for three years.

“First, I love Microsoft and Microsoft did not lose me â€” at least as a supporter and friend. I am not throwing away my Tablet PC or my Xbox or my other Microsoft stuff. 🙂

Second, my management team is awesome and I don’t have a beef with them at all. They have ALWAYS supported me. I have, in my pocket, a corporate American Express card and they never have questioned any of my expenses. The reason I shared rooms with other bloggers is because I always treated Microsoft as a startup. I don’t believe it’s proper to waste shareholder resources if you don’t need to….”

Lessons to be learnt here; work on your personal brand and opportunities will come to you. For Robert first it was an uber-cool job (not the title but the content) at Microsoft and now the new opportunity as a videoblogger at PodTech.net

But do not forget that Robert has been at it for almost 6 years now. Before these opportunities cam his way he worked his butt in regular jobs that most of the living (human) being do.

Agreed it is hard work. But hard work pays most of the times with a little bit of smart thinking sprinkled over it. It doesn’t matter whether you are doing a start-up or in a job or you are a student giving a vent to your thoughts and working what you are passionate about will never hurt. Who knows what opportunity it will bring to your doorstep?

Many bloggers are asking questions like, what will Robert blog about after leaving Microsoft. My friends who are asking these questions better be aware that he used to be a blogger much before he joined Microsoft. The links below should help;

– Robert says Hello to the world
– Robert moving to PodTech.net

Share/ comment how you find the posts here and keep watching this space for more on the big and small happenings on planet earth and beyond.